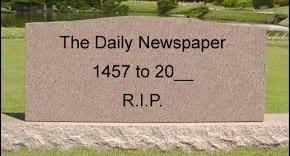 I recently got a phone call from a friend whose son wants to become a newspaper reporter. She wondered whether I was willing to help her dissuade him from getting into the profession. He is studying “communications” and takes courses in various aspects of “communicating.”

My friend knows there is more money in PR and marketing and that many believe the newspaper business is dying. Her son is learning the basic tools of modern technology-driven journalism, communications and PR — tools that didn’t exist when I studied my craft.

These are things that old-school reporters need to learn on their own to compete in today’s online news world. In print in the old days, we only needed to know the “Five W’s and H” (who, what, where, why, when and how) and have the driving need to be in the newspaper business.

And know how to report and write.

Despite knowing there was more money in other communications fields, and the problems with the newspaper industry, my friend’s son wants to be an old-school journalist.

He has the itch: Passionate about true journalism, the love of breaking news and beating the competition. However, he doesn’t want to strictly be an online journalist — nor a content editor, nor a communications or PR director — but a newspaper reporter.

I have been in the business for three decades and I love it. But, I was determined to play Devil’s Advocate. So when we spoke, my question was: Why?

In recent years, “Newspaper Reporter” has been at the bottom of the list of lowest paying jobs, I explained. (Schools still teach heavily attended journalism courses, because ever since Woodward and Bernstein decades ago the job has been considered sexy, so people apply.)

But this man apparently had the inexplicable gene: He was determined to become a journalist and work for a newspaper. I was not about to comply with my friend’s wishes and dissuade her son.

Will he have a place to go?

The question is are newspapers truly going or gone — or will they make a comeback because people enjoy holding printed pages and reading in-depth stories.

This is slightly simplistic, but newspapers are a risky business because the ad dollars have other “news” places to go.

Warren Buffett invested in the newspaper business, though part of his strategy has been to thin the staff. According to a shareholders’ letter Buffett wrote in 2013 after spending the previous 15 months spending approximately $334 million on newspapers:

“Newspapers continue to reign supreme, however, in the delivery of local news. If you want to know what’s going on in your town – whether the news is about the mayor or taxes or high school football – there is no substitute for a local newspaper that is doing its job.”

Hyperlocal news seems to hold the key as to whether print survives, according to Buffett and other media industry experts.

However, this past February Buffett slightly changed his tune when he told CNBC he foresees only two major newspapers surviving in print: The New York Times and The Wall Street Journal.

Luckily for my friend’s son, there are still small newspapers that are hiring, usually in places he never expected to visit, let alone live. I told him if he is that determined, he will find a newspaper that will appreciate his persistence. And though the paper most probably has an online element, he also will appear in print.

And, according to Poynter, those small hyperlocal newspapers will survive with community support:

“An industry that is dying is still alive. It is not dead — yet. While alive, it may continue to perform vital services to a community — services such as news and information, keeping an eye on city hall, on sewage in the bay, on the failures of local schools. It may continue to be the best we’ve got.”