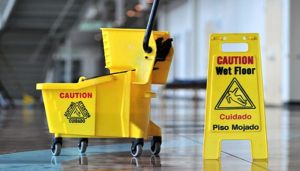 I used to visit my uncle at his huge textile factory in Long Island City, N.Y. The man was owner of a well-respected company and a giant in his industrial circle.

Each morning, he would bring three cups of coffee to work: One for himself, one for his receptionist and one for the janitor.

One morning on my weekly visit, I asked him: “Why, if you own the firm are you doing this”?

The answer surprised me, but taught me an important lesson: When you enter the offices of the company you work for, want to work for, or just have a scheduled meeting with an associate, always treat each person who crosses your path as if they owned the place.

We all have had bosses who treated us brutally and all have witnessed colleagues who treat the janitor as if he or she was of less importance than that boss.

Not only does it show that you have little regard for your fellow human being but — more importantly in a business situation — it shows you have little knowledge of human resources.

(We won’t even get into the first time I was referred to as “human collateral” and almost forgot the point of this post and nearly reverted to the street kid I once was.)

There is an old business axiom that goes something like this: I’d rather be respected and feared than loved.

To me, that’s a bunch of malarkey.

Most of us, barring those who are totally miserable on the job, want to make their worth known. We want to be appreciated and respected for what we do and what we bring to the table.

This does not mean you have to “love” everyone you work with or for. What it does mean — and without sound trite, or biblical — you should do onto others.

On that note, here are several lessons I have learned in my years as an employer and employee:

This might seem like obvious comments, and you might not always be in the mood to have to sit through — let’s say a meeting you consider full of drivel.

But in the long run, it will serve you well.

Just ask my ex-boss, who was just fired for his negative attitude toward his employees.

All I could do was smile as I waved good-bye.

And, by the way, I bring the receptionist coffee every morning.

On LinkedIn, for example, you can find these people, or people who know these people, or those who are somehow connected. It can be a very useful tool in getting a job or more business — no complaints there.

You network elsewhere and meet more people, who know or knew people whom you know or who know of you — or who you once were.

And here my dear colleagues lies — as the late, great Frank Zappa said — the “crux of the biscuit”:

Who of these people are really connections — and which ones know who you are — TODAY? And which ones remember who you were, maybe as a different and less — or, in some cases more — appealing a colleague than you are now?

It is therefore critical that before you send your references and connections off into the world, it’s best to reconnect with the people you’re listing and make sure they are who you think they are and reinforce to them who you are at this point in your life.

I’ve been working since I was 14 and along the way have met a lot of people — been good to many — maybe not as good to others.

I have lived in several countries and, in some, actually have accomplished at a very early age what some people never accomplish in a lifetime. I can back this up.

I remember my mother telling someone when I was 21 that I had already lived three lifetimes.

This post is about connections — and whether they are just part of your past who can be of no help to you, or you to them.

Or even worse: They don’t remember when you were there for them and, now that you are in need, they are nowhere to be found.

So let the story be told.

As is my way, this tale will be slightly altered so no links can be made to those guilty of what I call severe and demeaning memory loss.

It was my second or third job, and I was approached by my boss and told of a colleague who had broken up with his live-in girlfriend and basically had nowhere to live.

I had taken in strays before — both human and animal — and she knew this. She also knew I had room in my house and asked if I would take the man in.

Without hesitation, I said yes.

Several years passed; my colleague was much more of a likeable character than I was — or, more likely, played the part very well. He also hung around me like a stray puppy as he built his network, through what even I will admit was intense charisma and good looks.

We still worked together, but he had found a place to live and I had moved in with my then-girlfriend.

And then several occurrences, some self-inflicted some happenstance, left me in a lurch. I was basically homeless and without a job.

So I turned to my colleague, but he said his current circumstances could offer me no solace.

Having met a sufficient number of ingrates in my life, I took it with a grain, and pulled a phoenix, getting my life back together.

Years passed. This once-homeless colleague of mine became a leader in his chosen profession and quite well known both here and abroad. I continued pursuing my career, had some setbacks here and there, but was doing quite well.

Then I heard that my old colleague had hit the pinnacle — so I approached him, not really out of immediate need, but figuring it might be of future use. Plus, I thought we might renew an old friendship.

This new superstar would not even acknowledge my existence. Worse: While speaking to mutual friends he said: “Oh yeah, I knew him — he once helped me find a place to live.”

I went ballistic and let him know as much.

As I said, he is now at the top of his profession, but I know to me — as a human being — he is still a user and manipulator.

Not everyone you think is a business or personal connection really is one. And when you are in need, be careful who you turn to.

May he continue with his unbridled success.